US Senator Marco Rubio to speak at The King’s Academy’s graduation. 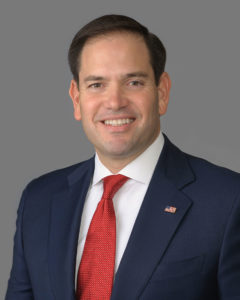 (West Palm Beach, Florida) – The King’s Academy is honored to announce US Senator Marco Rubio as the keynote speaker at its 2018 Graduation Ceremony. Senator Rubio will share his experiences as an American public servant who promotes the American dream and a proud Cuban-American who has lived it. He will also convey the importance of faith, family, and hard work with King’s Class of 2018.

Senator Rubio was elected to the United States Senate in 2010. He also served as a City Commissioner for West Miami before serving in the Florida House of Representatives from 2000 through 2008. He has spent most of his life in West Miami, where he resides with his wife Jeanette and their four children.

The King’s Academy’s 47th Annual Commencement Exercises will be held at 6:30 pm on May 31st at Christ Fellowship in Palm Beach Gardens.