The King’s Academy Conservatory Named in Recognition of a $1 Million Gift from Ms. Jan Smith 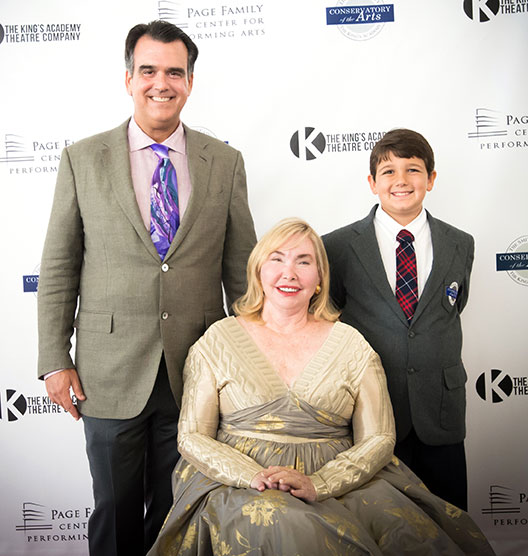 The King’s Academy and Manhattan Concert Productions collaborated to produce the school’s Golden Anniversary Broadway Spectacular. The two sold-out performances featured a school and community wide celebration with Broadway’s best. The Smith Family Conservatory of the Arts’ students including His People Honors Choir, In Him, King’s Kids, and Dance, performed with King’s alumni and renowned Broadway professionals. The performance combined a star- studded cast and the excellence for which The Smith Family Conservatory is known.

Ms. Jan Smith is an avid patron of the arts and a tremendous supporter of The King’s Academy. Her son Michael is a King’s graduate and grandson Hunter is a current student. Jan has been involved in the school since the early 1980’s. Over the years, her generosity has helped the school to rise to the next level of excellence in Christian education. TKA’s President Randal Martin expressed his appreciation by sharing, “Jan’s generous gift to endow the program allows The Smith Family Conservatory of the Arts to continue its tradition of excellence while allowing the program to pursue new endeavors and to provide some of the finest performing arts education in the country.”

Ms. Smith’s service and generosity is reflected throughout The King’s Academy. Her contributions include serving as Grandparent Chair of the Page Center’s “Take A Seat Campaign”, volunteering with the school’s “Friends of the Library”, working on the committee to remodel the Rosemary Beaumont Library and school’s clinic as well as underwriting the Smith Family Laboratory in the Boswell Center for Science & Technology.

“We are so excited to be able to give back to The King’s Academy for all they have given to my family over the last 45 years. They have provided excellent academic, sports, and conservatory programs, but more importantly they have been family,” shared Ms. Smith. She went on to say, “I know for sure that some of my greatest days are in front of me as I work with David Snyder (the school’s Artistic Director) and conservatory students as they embark on a journey to discover their hopes and dreams.”

“Jan’s influence on the Conservatory is more than financial, she truly is personally invested in The King’s Academy and desires to make an eternal impact on the lives of our students,” stated Mr. David Snyder. He went on to share, “Her investment allows The King’s Academy to sustain our high level of work, and allows me to try new things and to reach for a higher level of excellence.”

“Jan has been a tremendous friend to The King’s Academy and to me personally,” said Mrs. Rosario Larson, TKA’s Director of Development. She continued, “I am grateful to her for the difference she has made in the lives of our students and school. Jan is truly an inspiration,”

The King’s Academy is a National Blue Ribbon School for Excellence in Education. The private Christian school, which is celebrating its 50th anniversary, serves approximately 1,500 students from preschool through twelfth grade and is accredited by the Southern Association of Colleges and Schools, the Association of Christian Schools International, and the Florida Association of Christian Colleges and Schools. The King’s Academy serves students and their families across Palm Beach County at its main campus at Belvedere Road and Sansbury’s Way in West Palm Beach and its satellite preschool campuses in Greenacres, Loxahatchee/Wellington, Palm Beach Gardens, Boynton Beach, and Royal Palm Beach. More information about The King’s Academy is available online at http://www.TKA.net.