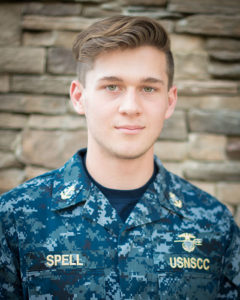 (West Palm Beach, FL) – Chief Petty Officer and The King’s Academy junior Ethan Spell of the American Veteran’s Division of the U.S. Naval Sea Cadet Corps was recently selected to attend the program’s Senior Leadership Academy (SLA) in Arlington, Va. The cadets were selected based upon their contributions to their communities, school records, and overall performance and standing in the Sea Cadet program.

“Ethan is well-deserving of this leadership training opportunity with the Sea Cadets and I am confident that he will represent The King’s Academy with excellence,” said Spell’s Advanced Placed United States History teacher at The King’s Academy Mr. John Raines. “His patriotism, wealth of knowledge of our country’s history and grasp of political issues is remarkable.”

“The 30 Sea Cadets selected to attend SLA 2019 are the most elite cadet group in the country. Between them, they have attended 177 advanced trainings and served as staff cadets at 70 trainings,” said the program’s executive director, retired Navy Captain Paul Zambernardi. “Now, it’s time for them to join their distinguished peers from around the country to spend a week sharpening their leadership skills and expanding their perspectives. We are excited to welcome these esteemed Sea Cadets to National Headquarters in April.”

This April, Ethan will join 30 of the country’s top Sea Cadets at a week-long program. The attendees will discuss and debate leadership and ethics topics relevant to today’s youth. They will also visit the U.S. Naval Academy, historic sites and museums around Washington, D.C., and will meet with distinguished leaders.

Spell has been a member of the U.S. Naval Sea Cadet Corps since 2012.  During this time, he has attended Recruit Training and several Advanced Trainings.

“I’m honoured to be selected and hope to represent my unit well,” said Spell. “I have learned so much and have become the person I am today because of the Sea Cadet program.”