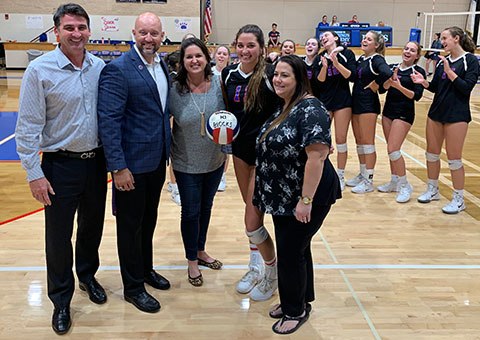 (West Palm Beach, FL) – Annie Smith (’21) is tall, about 6’1″. Too often though, being tall comes with an assumption of being skilled and that is very rarely the case.  To be skilled, especially in athletics, you have to work and that is what Annie Smith has combined with her height to take herself to new levels. She has put in the work. Smith, as a middle, was a key player her freshmen season in which the Lions went undefeated in the regular season and advanced all the way to the FHSAA regional championship. But that 2017 team was dominated by seniors. Since then, Smith has had to grow as a player and a leader to help the program regain its footing. And she has done exactly that. The program has steadily reestablished itself as a force in South Florida most recently seen in the Lions’ thrilling 5-set win over Oxbridge in front of a raucous crowd at the Loveland Athletic Center.

‘Annie has been a big part of our volleyball success over the past three seasons. She possesses incredible intensity and athletic abilities and that makes her a lot of fun to coach. We are blessed to have her here at King’s and I can’t wait to see what she will do over the remainder of her career.’ – Christy Lee-Taylor, Varsity Volleyball Head Coach

‘One of the things I enjoy most about my job is watching young people grow over the course of years and watching the value that they add grow with them. Annie is a talented student-athlete, we could all see statitistical success coming, but watching her lead her teammates is where the growth is most meaningful. It’ll be a lot of fun to watch what her and her teammates accomplish over the next two seasons.’ – Dr. Chris Hobbs, Director of Athletics

Smith’s progression continues as she has now placed herself in the record books. On Friday evening, September 27, playing in the Palm Beach Classic tournament, Smith recorded her 173rd block, breaking the record of 172 held by Briana Whalin (’11). Smith’s total will likely be so high that the record will never be broken again considering that she has not even completed her junior season.

The King’s Academy Athletic Department mission to provide its student-athletes an excellent athletic experience with eternal impact. A member of the Florida High School Athletic Association, the ‘Lions’ have claimed 123 district titles, 40 regional titles, and 11 state championships. Student-athletes at The King’s Academy have gone on to successful collegiate athletic careers at some of the most accomplished universities in the country as well as professional athletic careers in baseball, basketball, football, soccer, and volleyball. The campus features facilities that would rival many small colleges; these facilities include the Loveland Athletic Center, Kahlert Stadium, the TKA Track & Field Stadium, and the Full-Page Aquatics Center. For more information about The King’s Academy Athletic Department, visit www.tkalions.net or follow on social media, @TKALions